The Government hospital has announced a lot of ambitious projects, expansion plans and renovation plans in recent years. Working in this direction, the hospital planned to renovate the existing design of the HVAC system.

Since the existing Fan Coil Units (FCUs) were functioning perfectly, the hospital wanted to retain the FCUs and renovate the rest of the HVAC system.

At this point, all the isolation rooms were required to be installed with Terminal HEPA filters with the existing FCUs, which had an inherent problem of having low external static pressure around 100 Pa max. This has put the hospital and the contractor in big dilemma.

The only solution left was to discard all the existing FCUs and install new AHUs. Again, this was extremely difficult to source the low airflow for high static AHUs. Without fixing this problem, they could not proceed with procuring and installing the terminal HEPA filters, since they would not get enough airflow and ACPH required for the isolation rooms.

Now, the challenge for AAF experts was to retain the current FCUs which have low static pressure and to install the terminal HEPA filter with a low-pressure drop (within 100 Pa) for their isolation rooms.

The initial pressure drop of a standard glass fiber media mini-pleat HEPA Filter with 2” media pack will be approximately 125 Pa. Hence, it was not recommended for the current situation.

Then, AAF proposed MegaCel-II range of HEPA filters with the industrial-grade ePTFE technology is designed for the unique requirements and challenges of the industry.

The initial pressure drop of these MegaCel-II filters is only 50 Pa. This seems to be the perfect solution for both the contractor and the client so that they could easily use their existing FCUs which will have enough static pressure to have the required airflow and ACPH. They will have approximately 75 Pa lower pressure drop than the standard HEPA filters and easily use their existing HVAC systems by retaining the existing FCUs. 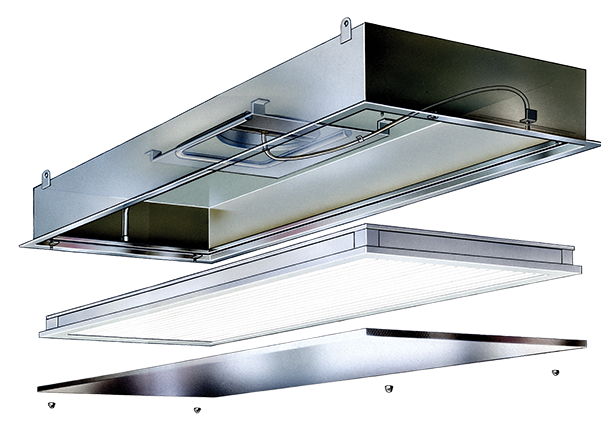 AAF’s approach to solving this unique problem made both the client & the contractor very confidant and satisfied with the solution.

Since the installation, AAF did not get any complaint and the company was awarded the replacement rate contract for the complete hospital for a period of 3 years.